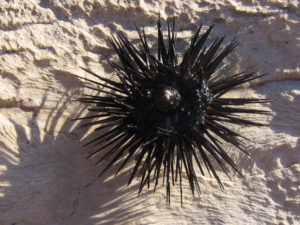 Sea urchins are easily recognized type of marine animals. They belong to the group of animals called echinoderms. There are around 200 species of sea urchins that can be found in oceans throughout the world. Sea urchins usually live in warm waters on the rocky bottom or close to the coral reefs. Pollution of the ocean and overfishing (they are used for the preparation of sushi in Japan) are major threats to the survival of sea urchins. Due to drastic reduction in the number of sea urchins in the wild, they are placed on the list of threatened species (they can become endangered in the near future).