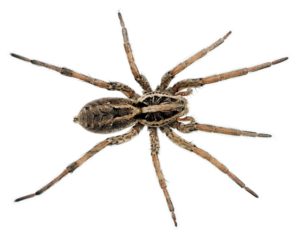 This might freak you out, but research suggests that you are never more than 10 feet away from a spider.

Don’t worry though, most of the time they are hiding away somewhere in some crevices minding their own business.

2. There are a lot of spiders

Spiders come in all different shapes and sizes, each with their own unique look and characteristics.

There are approximately over 30,000 different species of spider currently known. However, some scientists believe that there are a lot more to be discovered.

3. Not all spider bites are deadly

There are a few spiders that cause some nasty bites, which due to their venom can cause some risky complications to your health. The majority of spiders will not bite humans and if they do, their venom isn’t strong enough to inflict any damage.

Unfortunately, and this pains me to say it, being bitten by a spider will not turn you into Spider-Man! Their venom doesn’t have that side effect. Believe me, if that was the case I wouldn’t be writing this blog, I’d be web-slinging around the streets of Surrey!

4. Female spiders have a large appetite

Unfortunately, this isn’t good news for the males.

In some cases, depending on the species, the female spider will eat the male spider before, during or after copulation!

Did you know that this behaviour of sexual cannibalism is what inspired the name of widow spiders, such as the black widow?

5. Spiders love to do the YMCA!

You probably think I am being ridiculous right now, but it’s true!

The peacock spider, Maratus volans, perform a dance as part of their mating ritual and it kind of looks like the YMCA. To add to this, the bright colours found on their abdomen make this a great spectacle to watch.

However, unfortunately, if the male spider’s rendition of the YMCA doesn’t impress the female she will attempt to attack, kill and even eat him.

Yes, you read that right, spider silk is actually really strong. It may seem weak and brittle but that is only due to how thin it is.

The silk in a spider’s web is actually five times stronger than a strand of steel the same thickness. It is also believed that a spider web made of strands as thick as a pencil could stop an aeroplane in flight! 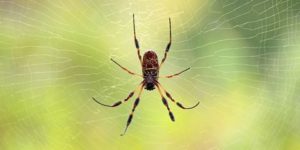 Unlike us, spiders have blue blood.

This may sound strange, considering we are used to seeing spider silk in the form of webs, but did you know that it is actually a liquid? When the silk comes into contact with the air, it hardens, allowing them to create and build their webs.

Not only do some species of spiders like to serenade their prospective partners with a dance, but they also like to offer their loved ones a gift wrapped in silk to try and sweet talk their way into a date.

However, sometimes these males can be quite sneaky and a bit cheap. Instead of offering gifts such as flies and other insects, they offer a cheap knock-off such as scraps of leaves, or old gifts which haven’t been successful with other females.

To be honest, it’s quite fascinating in the way in which a spider‘s muscles work. Their muscles can only pull their legs inward but can’t extend them out again. To get around this issue, spiders will pump a watery liquid into their legs to help push them out again.

This is why whenever you see a dead spider, its legs are always curled inwards as there is no fluid being distributed to retract them.

THE MATING HABITS OF THE COMMON HOUSEFLY