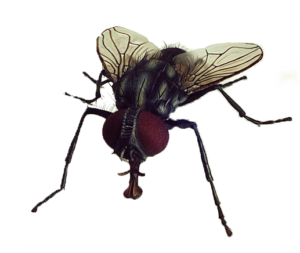 Houseflies live only 15 to 30 days, but they devote a significant portion of those days to reproduction. Mating starts with a short courtship process initiated by the male. After the female’s eggs are fertilized, she flies off in search of the nearest pile of smelly manure or garbage and lays her eggs.

The male is in charge of housefly courtship. He identifies available females by the pheromones they produce. A pheromone is a chemical signal, in this case one that lets the male know a female fly is sexually mature and ready to mate. The male isn’t very subtle when he shows his interest. He bumps into the object of his affection when she’s flying, although mating takes place on the ground or another stable surface. If both flies are already on a stable surface, the male jumps on top of the female. The male shows his intentions by spreading the female’s wings and touching or lapping her head. If the female isn’t interested, she flies away or shakes the male off her body.

If a female fly wants to mate, she puts her ovipositor inside the male fly’s genital opening, located at the bottom of his abdomen. The ovipositor is a long thin tube that extends from the end of the female’s abdomen. When she isn’t mating or laying eggs, the ovipositor stays hidden. Once the ovipositor is in place, the male releases sperm, which travel through the female’s reproductive tract to fertilize her eggs. The entire mating process lasts from 30 minutes to two hours, notes Animal Diversity Web.

The Bigger the Better

Females usually mate only once, while males mate with many females. Males have definite preferences when they choose females. Researchers at Chungnam National University studied housefly courtship and mating practices and discovered that males preferred to mate with large 7-day-old females. It might sound as if finding a female would be an easy task, but some males mistakenly target other males or even inanimate objects. This can happen because some females don’t produce high levels of pheromones and males can confuse small dark objects for other flies.

From Egg to Fly

The female uses her ovipositor to make a hole in the manure, garbage or other decaying material she has selected and releases her fertilized eggs. She expels up to 150 eggs at one time and can lay 500 over the course of three or four days. Eggs hatch into wormlike larvae, commonly called maggots, eight to 24 hours after they’re laid. The maggots feed on the manure, garbage or other organic material for about five days, and then form pupae, hard shells that protect them as they transform into mature flies. After four days an adult housefly emerges from each pupa. The young flies begin mating just one to two days later.

How To Get Rid Of Cockroach Home Remedies