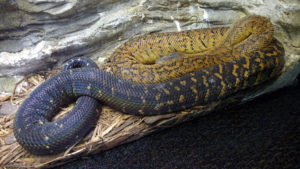 The Jamaican boa is golden green around the head and along the anterior section of the body, with black zigzag crossbars, becoming black toward the posterior end of its body. The snake’s body is quite long, up to 2 metres (6 feet 7 inches) in total length.

Found in Jamaica, including Goat Island. The type locality given is “Jamaica”, Moist limestone forests.

This species is classified as Vulnerable (VU) on the IUCN Red List of Threatened Species with the following criteria: A2ce (v2.3, 1994). A species is listed as such when the best available evidence indicates that a population decline of 20% is expected within the next ten years or three generations, whichever is the longer, due to a decline in the quality and area of occupancy. It is therefore considered to be facing a high risk of extinction in the wild. Year assessed: 1996.

Their natural habitat is being destroyed, which is forcing them into inhabited areas, where they are captured and killed. Some measures have been taken to afford these animals some protection:

How To Get Rid Of Cockroach Home Remedies